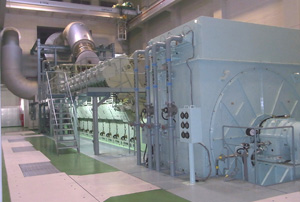 The order for the power generator came in June 2013 as a full-turnkey project designed to augment the No. 6 generator at OEPC's Ishigaki Power Plant No. 2. Like the No. 5 diesel power generator delivered to OEPC in August 2011, this one is powered by a medium-speed, four-stroke diesel engine and is one of the largest in the world. Kawasaki was responsible for the design of the plant as well as everything from the supply and installation of engines, power generators, power distribution switchgears and control units, to civil engineering and construction work.

OEPC is working to increase its power facilities' output to meet a steadily growing demand for electricity that is being fueled by Ishigaki Island's thriving resort industry. Up until now the Ishigaki power plant had been relying mainly on four large diesel generators (three 10MW generators and one 18MW generator), and two 5MW gas turbine generators, also supplied by Kawasaki. The newly added 18MW power generator will help boost OEPC's capacity to supply electricity throughout the island.

Kawasaki continues to fuel a brighter future with distributed power generation systems that are taking its energy and environmental business to new heights as it works with an eye to meeting the world's growing need for power.