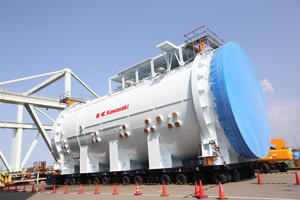 Tokyo, September 12, 2014 — Kawasaki Heavy Industries, Ltd. announced today that it has completed one of the largest autoclaves in the world. Used for curing composites, the new autoclave is designed to support increasing production demand for the Boeing 787 Dreamliner, Boeing's state-of-the-art mid-size commercial airplane. The autoclave was constructed at Kawasaki's Harima Works (in Hyogo Prefecture's town of Harima) and will be shipped today to Nagoya Works 1, Kawasaki's aircraft component assembly and production facility in Yatomi City, Aichi Prefecture. The second autoclave to be used at Nagoya Works 1, it will be installed in a new plant slated to be completed at the end of this fiscal year.

With a diameter of nine meters, an overall length of 30 meters, and a gross weight of 920 tons, the new autoclave is one of the largest in the world. It was designed by Kawasaki Engineering Co., Ltd., a Kawasaki group company located in Hyogo Prefecture's Kobe City, and then assembled and produced by Kawasaki. As one of the key partners in the 787 Dreamliner program, Kawasaki is responsible for the design, development and manufacturing of the plane’s forward fuselage, main landing gear wheel well, and fixed trailing edges. The new autoclave will be used for high-temperature, high-pressure curing of the one-piece fuselage made of layers of composite material to ensure stable production of high quality forward fuselages with uniform hardness and strength.

Kawasaki built the North Plant of its Nagoya Works 1 in July 2006 to manufacture parts for the 787 Dreamliner and added the South Plant in March 2010 to support growing production of the aircraft. The new plant currently under construction will enable Kawasaki to augment its output capacity and prepare for further production increases as well as the manufacturing of the aircraft's derivative model, the 787-10.

Kawasaki has been maintaining a steady rate of production since it shipped the first forward fuselage for the 787-8 in 2007. Kawasaki will work to boost production of the Boeing 787 as it fulfills its vital role in the Dreamliner program by supplying high quality products, all with an eye to taking its commercial aircraft business to new heights.