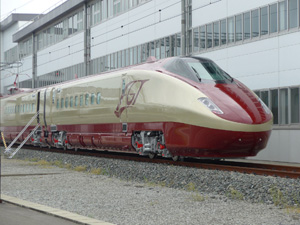 Developed by JRTT, the new FGT test model is equipped with variable gauge wheelsets that automatically adjust the distance between the left and right wheels so that a train can travel across two railway networks with differing track gauges, such as the 1,435-mm gauge Shinkansen network and the 1,067-mm gauge regional rail network. Kawasaki previously participated in the development of two FGT test model trains.

This new FGT test model is a four-car train in which Kawasaki was responsible for producing the carbodies and variable gauge bogies for three of the rail cars, including the two lead cars and a middle car (car No. 3). Employing the unique technological capability Kawasaki has gained via the development and production of various types of rail cars, including commuter and high-speed trains, the new FGT test model features the latest in technology, including the carbon fiber-reinforced plastic (CFRP) body structure of the lead cars, lightweight special high-voltage electrical parts, dimmable glass to replace curtains, and more. Kawasaki also drew on its extensive track record of rolling stock design, to head up the design of the new FGT test model's exterior.

The new model will be put through the paces in test runs performed by JRTT on JR Kyushu's railway network. Kawasaki will cooperate in conducting performance evaluations and verifying maintainability and economic efficiency of the test model on both the Shinkansen and regional lines.

Kawasaki continues to leverage the expertise and technological capability it has gained through a wide range of high-speed train projects to supply environmentally friendly high-speed rail cars.