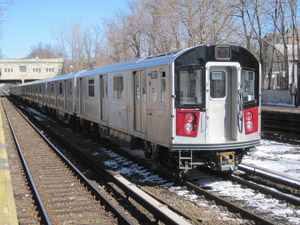 Tokyo, January 23, 2014 — Kawasaki Heavy Industries, Ltd. announced today that Kawasaki Rail Car, Inc. (KRC), its U.S. subsidiary based in Yonkers, New York, has delivered and received conditional acceptance for revenue service of the base order cars for the MTA New York City Transit (NYCT*1), which include the first train of the new R188 subway cars.

The R188 subway cars are based on the R142A cars, of which a total of 600 cars were delivered between 2001 and 2005. The R188 cars adopt the Communication-Based Train Control (CBTC*2) system for improved operational efficiency, reliability and safety. Manufacturing of the new carbody structure and equipment installation are being conducted at the Lincoln Plant in Nebraska, and final assembly and function testing are being performed at the Yonkers Plant in New York. Conversion of the existing R142A cars is all being handled at the Yonkers Plant.

As part of the economic stimulus measures by President Obama, the United States is actively considering capital investments in transportation and infrastructure to reinforce transportation capacity for metropolitan transportation in the Northeastern Corridor, as well as intercity transits including Amtrak.

Kawasaki will continue to enhance its credibility with its technological expertise by providing environmentally friendly modes of transportation to the United States and markets around the world.

Overview of the R188