Tokyo, January 20, 2014 — Kawasaki Thermal Engineering Co., Ltd. (KTE) announced today that it will launch a verification test of a solar-aided air conditioning system featuring a solar absorption chiller as the main component. The test will begin today on the Universitas Indonesia campus in Depok, Indonesia.

This test will be conducted as a part of the Entrusted Business on the Technical Cooperation for Co-benefit Type Solar-aided Air-conditioning System in Indonesia During the Fiscal Years 2013 by the Japanese Ministry of the Environment. In this project, Kawasaki will test a co-benefit type operation aimed at reducing greenhouse gas emissions and mitigating the country's environmental pollution. If proven effective, the technology will be a boost for the country's environmental policies while also contributing to Kawasaki's business expansion overseas.

The system to be used for the verification test will provide air conditioning for a new building of the university. The test will run through March 2015 to validate the effectiveness of the system.

The absorption chiller developed by Kawasaki uses gas and oil as fuel. As such, it consumes far less electricity than a typical electric chiller, considerably reducing power demands for air conditioning. It can also use various heat sources, including solar energy and other renewable energies, to help reduce fossil fuel consumption. By using solar heat, Kawasaki's solar absorption chiller can reduce fuel consumption by approximately 14%. Compared with an electric chiller of the same capacity, it releases about 43% less CO2 into the atmosphere.

With an annual growth rate of 5 to 6%, Indonesia has seen its energy consumption rise year after year. A huge chunk of the power demand comes from air conditioning facilities. The country's heavy reliance on thermal power plants is further deepening its environmental woes, as more and more sulfur dioxide and other pollutants are emitted into the air. On the other hand, Indonesia is taking an active stance toward pursuing measures against climate change. The country has announced a plan to reduce greenhouse gas emissions within its borders by 26% by 2020, and it shows a great deal of interest in introducing energy-saving systems.

With an eye to protecting the environment, Kawasaki will continue to develop and deliver systems and equipment providing superior energy efficiency and environmental performance. 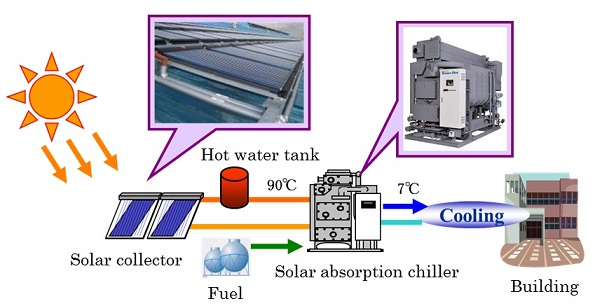