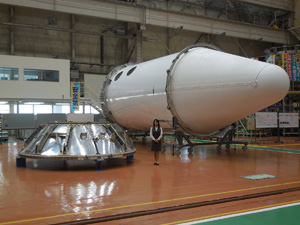 Tokyo, November 18, 2013 — Kawasaki Heavy Industries, Ltd. announced today that it has shipped a payload fairing (PLF)*1 for the H-IIA launch vehicle to the Japan Aerospace Exploration Agency's (JAXA) Tanegashima Space Center (TNSC). The PLF was shipped from the Harima Works, where it was assembled following design and manufacturing at the Gifu Works.

At TNSC, the PLF will be incorporated into the launch vehicle by Mitsubishi Heavy Industries, Ltd. in preparation for the upcoming launch scheduled to take place before the end of fiscal 2013. The four-meter single-payload fairing (4S model) will protect the Global Precipitation Measurement*2 satellite jointly developed by JAXA and NASA.

The PLFs for the H-IIA launch vehicle are designed to meet a broad range of payload specifications such as the launch of large satellites as well as the simultaneous launch of two satellites. Kawasaki will continue to play a vital role in Japan's satellite launch industry via the development and production of cutting-edge PLFs.

*1
A payload fairing is an enclosure installed at the tip of a launch vehicle that protects the satellite from aerodynamic heating, acoustic noise and vibration during liftoff. After the launch vehicle leaves the earth's atmosphere, the fairing splits in two and is jettisoned, allowing the satellite to separate from the launch vehicle.
*2
The Global Precipitation Measurement (GPM) mission will provide observations of rain and snow worldwide using multiple satellites. The data collected through this mission will be used toward increasing the accuracy and frequency of precipitation measurement.