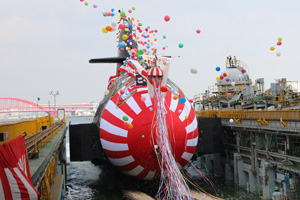 Tokyo, October 31, 2013 — Kawasaki Heavy Industries, Ltd. today held  a ceremony marking the launch of the submarine Kokuryu, which was built for the Japan Ministry of Defense (MOD) at its Kobe Works' first dock at 12:35 AM. The ceremony was attended by a delegation of top JDA officials.

The submarine is the 6th Soryu class submarine built by Kawasaki, and the 26th built at this shipyard after World War II.