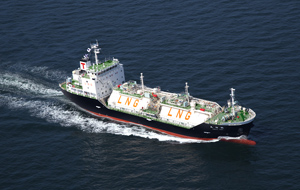 Tokyo, October 31, 2013 — Kawasaki Heavy Industries, Ltd. announced that it has delivered the LNG carrier Kakuyumaru (Kawasaki hull no. 1706) to Tsurumi Sunmarine Co., Ltd. today at its Sakaide Shipyard. This vessel is the fifth 2,500 m3-type domestic LNG carrier to be developed by Kawasaki.