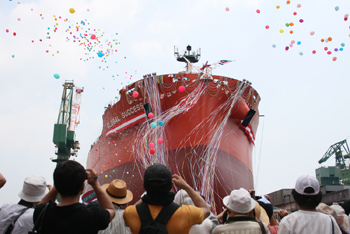 Tokyo, August 7, 2013 — Kawasaki Heavy Industries, Ltd. today launched the Global Success bulk carrier, for Globalwealth S. A. at its Kobe Works. This vessel (Kawasaki hull no.1703) is the 30th bulk carrier with a capacity of 58,000 DWT developed by Kawasaki. After it is outfitted at the Kobe Works quay, the carrier will be delivered in October 2013.

Features of the Global Success