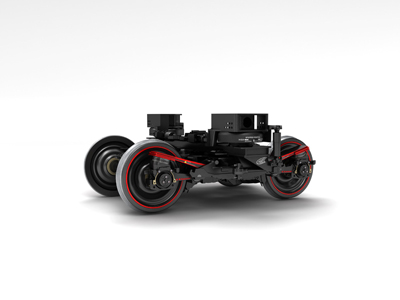 Tokyo, June 24, 2013 — Kawasaki Heavy Industries, Ltd. announced today that it has developed a next-generation efWING*1 rolling stock bogie that uses CFRP*2 for the main structure of its framework. CFRP is a material that exhibits exceptional strength despite being lightweight, and is often used in areas such as aerospace. A rolling stock bogie using CFRP for the bogie frame is a world first.

For the newly developed efWING, Kawasaki adopted CFRP for the main structure of the bogie frame, which used to be made of steel. In addition, the CFRP bogie frame's suspension function eliminates the need for coil springs. Kawasaki succeeded in developing a lighter bogie with a more simplified structure by integrating the coil spring function with the bogie frame. As a result, the weight of the bogie frame was reduced by approximately 40% compared to the steel-type frame, which roughly translates into a reduction of about 900 kg per train car. This significant reduction in weight contributes to increased energy efficiency (i.e. less running cost) and reduced CO2 emissions.

The efWING has already undergone about 4,500 km of operational tests conducted by the Transportation Technology Center, Inc. (TTCI), which confirmed its basic performance and safety performance under operation. In particular, the arch-shaped CFRP bogie frame featuring suspension functionality stabilizes the force transferred by each wheel onto the rail. This results in improved passenger comfort as well as greater protection against derailment, with the rate of wheel load reduction*3 due to rail irregularity reduced to less than half the previous rate.

The efWING has been designed according to the principles of Kansei Engineering, taking a holistic approach to seek the ideal combination of performance, aesthetics and costs. The result is a new generation of rolling stock bogies manifesting a sophisticated harmony of function and aesthetics.

Kawasaki will continue to leverage its superior technology and reliability to provide rolling stock products that contribute to the future of the planet to customers around the world.