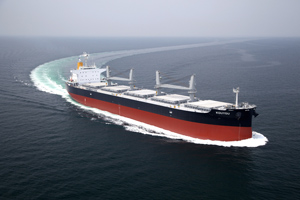 Tokyo, June 10, 2013 — Kawasaki Heavy Industries, Ltd. announced today that it delivered the Kouyou bulk carrier to Venus Ocean Navigation S.A. at its Sakaide Works on June 7. The vessel (Kawasaki hull no. 1699) is the 29th state-of-the-art bulk carrier with a capacity of 58,000 DWT to be developed by Kawasaki.

Features of the Kouyou