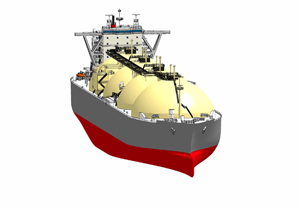 Tokyo, June 4, 2013 — Kawasaki Heavy Industries, Ltd. announced today that it has signed a shipbuilding contract with Kawasaki Kisen Kaisha, Ltd. for one 182,000 m3-type LNG carrier. The vessel is to be built at Kawasaki's Sakaide Shipyard and is slated for completion in October 2016. Once completed, the vessel is scheduled to be used to transport LNG that the CPC Corporation, Taiwan will purchase from the Ichthys LNG Project in Australia, which is led by INPEX CORPORATION.

LNG Carriers are generally fueled by natural gas that evaporates during transport (boil-off gas). While recent technological advances have reduced the amount of fuel consumption, they gave rise to a new problem of excess boil-off gas that is left behind without being consumed as fuel. Kawasaki's LNG Carriers feature a proprietary thermal insulation system — Kawasaki Panel System — with an excellent track record spanning over 30 years. The panel system has been further improved for the new ship to achieve the world's lowest boil-off rate at 0.08% per day. With this improvement, the ship is able to minimize unused boil-off gas for outstanding environmental performance and economic efficiency.

Kawasaki will actively pursue its shipbuilding operations in light of the expected rise in demand for LNG and other clean energy fuels.

The DFD (Dual Fuel Diesel) engine is capable of burning both oil and gas while a conventional generator engine can only burn oil for fuel. The propulsion system is comprised of a number of generator diesel engines, variable speed propulsion motors and other components. Either gas or oil is supplied to the engines to generate electricity, which drives the propulsion motors that power the propeller.