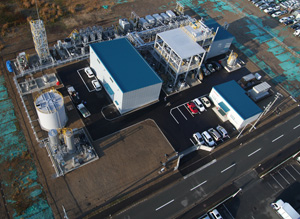 Tokyo, May 30, 2013 — Kawasaki Heavy Industries, Ltd. announced today that it has established a new technology for the low-cost production of bioethanol from rice straw, a non-food source of biomass. Kawasaki recently completed a related manufacturing test it was working on as part of the Ministry of Agriculture, Forestry and Fisheries (MAFF) soft cellulose utilization project.

This project was offered for public bidding by the MAFF with the aim of establishing a new technology for the production of biofuel from rice straw and other non-food soft cellulose biomass that has hitherto remained untapped as resources. Under the full cooperation of Akita Prefecture, Kawasaki has pursued this project with the Akita Agriculture Public Corporation over a period of five years starting in fiscal 2008.

In the recently completed test, Kawasaki used a new hydrothermal technique to saccharify cellulose in the process of producing bioethanol. The existing technique requires the use of sulfuric acid and enzymes in the saccharification process, and therefore cost was a major issue. With Kawasaki's new technique, however, this process can be completed without sulfuric acid treatment, making it an excellent alternative in terms of the environment and economic efficiency. Further, by changing the hydrothermal condition, this technique can be applied to convert soft cellulose other than rice straw into sugar.

Kawasaki designed and constructed a demonstration plant with a daily production capacity of 200 liters in Katagami City, Akita Prefacture, in November 2009. In October of the following year, Kawasaki successfully completed a driving test of a vehicle running on bioethanol pruduced at the plant. Subsequently, the plant was continuously operated through the entire process of pretreatment, saccharification, fermentation, distillation and dehydration to demonstrate the ability to manufacture a stable supply of bioethanol compliant with JIS*. As a result, Kawasaki completed a technology for the production of bioethanol on a commercial scale at a cost of 40 yen per liter.

*
JIS: A standard stipulating quality-related matters and testing methods concerning ethanol fuel to be used for automobile gasoline.
*2
Producing cost: The cost stated above for producting ethanol from rice straw does not include the cost for collecting and transporting rice straw, fuel cost for powering the biomass boiler, and depreciation expenses for the manufacturing equipment.