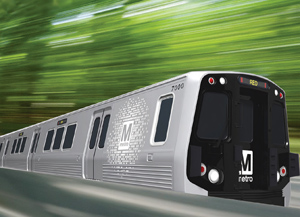 Tokyo, May 16, 2013 — Kawasaki Heavy Industries, Ltd. announced today that it has received an order for an additional 100 subway cars (7000 Series) from Washington Metropolitan Area Transit Authority (WMATA). The contract is worth about $184 million, and delivery is scheduled to be completed in August 2018.

This order is in addition to the initial order of 64 cars in 2010, and an optional order for 364 cars in 2012. This brings the total number of 7000 Series cars ordered to 528. The cumulative total of the contract value has now grown to $1.07 billion. The additional 100 cars will replace existing subway cars.

The 7000 Series are being introduced as part of a new phase of customer service, and will be used in the expansion project to Dulles International Airport, replace some of the oldest rail cars in the existing fleet, and help ease congestion. The first stainless steel cars in use by WMATA, the 7000 Series also increases passenger capacity over existing designs by eliminating one operator compartment every two cars. State-of-the-art systems that are unavailable in the existing fleet, including monitors for displaying digital content, CCTV cameras and a communications network, are also incorporated into the design.

In the US, investment in social capital including transportation infrastructure is being actively considered as part of President Obama's economic stimulus package. Against this background, the country expects to see a growth in projects to replace existing rail cars and boost transportation capacity for the urban transits along the Northeastern Corridor, as well as intercity transits including Amtrak.

Kawasaki is looking to build new credibility with its technological expertise as it provides environmentally friendly modes of transportation to the US and markets around the world.