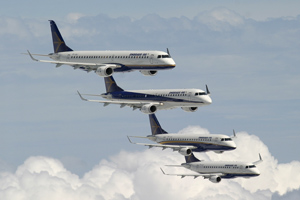 The Embraer 170/190 series are 70- to 120-seat regional jet aircraft developed by Brazilian jet manufacturer Embraer S.A. These aircraft offer wide cabin space and excellent maneuverability, making them highly popular with major airlines as well as Low Cost Carriers and air charter operators around the world. Currently, there are 908 units in service (as of the end of December 2012) by 65 airlines in 42 countries, including 18 that are being operated in Japan by J-AIR and Fuji Dream Airlines.

By providing products of the highest quality, Kawasaki will contribute to the Embraer S.A. program and will continue to actively promote operations aimed at expanding the commercial aircraft business.

* KMS-6115 is Kawasaki's proprietary material for aircraft made from high-performance carbon fiber for general industrial applications and highly tough epoxy resin, instead of using a conventional special grade carbon fiber, to achieve cost reduction. By adding adhesive property to epoxy resin, Kawasaki succeeded in enhancing tensile strength and compressive strength by 60% and 30%, respectively.