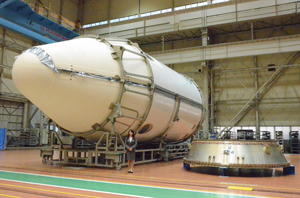 Tokyo, February 25, 2013 — Kawasaki Heavy Industries, Ltd. announced today that it has shipped a payload fairing (PLF*1) for the H-IIB Launch Vehicle No. 4 to the Japan Aerospace Exploration Agency's (JAXA) Tanegashima Space Center, where it will be incorporated into the launch vehicle in preparation for the upcoming launch of JAXA’S HTV-4*2 unmanned cargo transporter this summer.

The 5S-H PLF is a longer version of the five-meter single (5S) model designed for the H-IIA Launch Vehicle. It features a 15-meter-long cylinder, which is three meters longer than the 5S model, as well as a reinforced structure that is designed to carry heavier payloads. The 5S-H PLF will carry one HTV.

Kawasaki is playing a vital role in today's satellite launch industry via the development and production of cutting-edge PLFs.

*1
A payload fairing is an enclosure installed at the tip of a launch vehicle that protects the satellite from aerodynamic heating, acoustic noise and vibration during liftoff. After the launch vehicle leaves the earth's atmosphere, the fairing splits in two and is jettisoned, allowing the satellite to separate from the launch vehicle.
*2
The H-II Transfer Vehicle (HTV) is an unmanned cargo transporter developed in Japan that is designed to deliver supplies to the International Space Station.