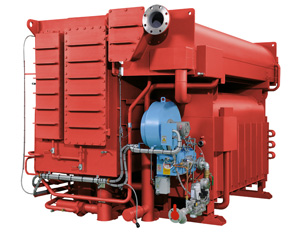 Tokyo, February 21, 2013 — Kawasaki Thermal Engineering Co., Ltd. (KTE) announced today that it will launch the new Efficio line of absorption chillers, which attained the world's highest COP*1 (1.51*2) for a double-effect absorption chiller, on April 1 in Japan, and in the latter part of 2013 for the overseas.

An absorption chiller is an environmentally friendly air conditioning system that uses water as a refrigerant and gas or oil as fuel. Ever since KTE commercialized the world's first absorption chiller in 1968, the company has pursued various technological developments as the leading company in absorption chillers. Today, they are used in a wide range of facilities from hotels and offices to commercial buildings, schools, hospitals, and factories, as well as for such applications as district heating and cooling, both in Japan and abroad.
The tight electricity supply following the Great East Japan Earthquake has given rise to a renewed interest in absorption chillers, which are far more energy-efficient than their electric counterparts.

With the new Efficio, the outstanding performance of Sigma Ace, its predecessor, has been taken to another level, attaining the world's highest rated COP for a double-effect absorption chiller and high annual operational efficiency*3, as well as enhanced system efficiency.

Features of the Efficio are summarized below.

The Efficio has attained a COP of 1.51, making it the world's most efficient double-effect absorption chiller. This outstanding performance was made possible through a combination of fuel-saving technologies, including the proprietary compact, high-performance plate heat exchanger, two-stage evaporation/absorption structure, high-efficiency heat exchanger tubes, and exhaust gas heat exchanger.

The Efficio's energy-saving features are not limited to the improved efficiency of the absorption chiller itself. This product also comes equipped with enhanced control functionality for boosting the efficiency of the entire system, including auxiliary equipment. Temperature sensors etc. are utilized to optimize the operation of the cooling water pump and other equipment according to load conditions, slashing annual energy consumption by nearly 50% and CO2 emissions by approximately 60% compared to existing systems. (Fig. 2)

The main unit of the absorption chiller has been made lighter and more compact, enabling additional savings in installation costs and foundation reinforcement costs.

The Efficio comes with such standard features as a 24/7 remote monitoring functionality (remote maintenance and other existing functionality) and a 5.7" color liquid crystal touch screen in the control panel for better operability and visibility.

*1
COP (Coefficient of Performance) is obtained by dividing cooling capacity by heat input.
*2
Japanese Industrial Standards
*3
Annual Operational efficiency indicates the efficiency over the course of an entire year under actual operating conditions. While operational efficiency varies depending on the building, application and other conditions, it can be improved by selecting a model with excellent partial load efficiency if the system will be operated under partial load for an extended period of time.
*4
Scheduled for release after October 2013

Cooling water inlet temperature conditions are as specified by the JIS standards (32°C at 100% load, 27°C at 0% load, with the temperature varying proportionally at loads between 0% and 100%).

As one of the conditions to be selected as a high operational efficiency model, the amount of cooling gas consumed in a year must be equivalent to or less than that of an absorption chiller with these performance levels.