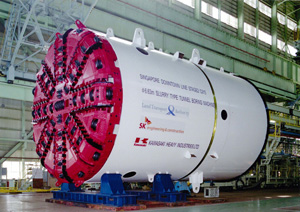 Tokyo, January 7, 2013 — Kawasaki Heavy Industries, Ltd. announced today that it has received an order from Korea's SK Engineering & Construction for five shield machines to be used in the construction of Singapore's high-voltage Transmission Cable Tunnel Project. The shield machines are scheduled for delivery between December 2013 and March 2014.

The tunneling machines ordered this time are all slurry shield machines with a diameter of 6.88m. These shield machines will be used in the excavation of two tunnels that will house high-voltage transmission cables in a major next-generation infrastructure project of SP Power Assets Ltd., a subsidiary of Singapore Power. The two tunnels, consisting of the 18.5km North-South Transmission Cable Tunnel and the 16.5km East-West Transmission Cable Tunnel, will run a total length of 35km, and the shield machines are earmarked for use in the excavation of the NS2 section of the North-South Tunnel from Mandai to Ang Mo Kio (5.4km) and the EW2 section of the East-West Tunnel from Holland to May (7.0km), a length of 12.4km in total. The excavation work is expected to be completed in 2016.

Combining shield tunneling technology for soft ground with tunnel boring machine (TBM) technology for carving out hard rock and gravel layers, the slurry shield machines ordered this time can excavate complex layers of rock and soil. In addition to being equipped with Kawasaki's proprietary cutter replacement system, the shield machines come with tailor-made features to suit the characteristics of the construction area. These include hydraulic overcutters and articulation mechanisms to handle the excavation of acute curves in hard-rock sections, as well as a seal structure to accommodate a maximum earth covering of 69m. Along with the shield machines, Kawasaki will also deliver backup equipment including slurry treatment plants.

To date, Kawasaki has amassed an order record of approximately 1,400 shield machines and TBMs. The latest order brings the number for Singapore to 27, including 10 for the MRT Downtown Line. This order is a testament to Kawasaki’s outstanding technological capability as well as the proven track record and reliability of its shield machines that can excavate any type of soil.

Kawasaki expects to see additional orders for shield machines coming from Singapore as the country moves ahead with construction plans for the MRT Thomson Line (total length: 30km x 2 tracks). Plans for subway construction are also underway in a number of major cities in India, Vietnam and the Middle East region, so stable medium- to long-term demand for tunneling machines can be expected in Asia as a whole.

Kawasaki intends to move steadily ahead to expand its shield machine and TBM sales in Japan and across the globe.

The following is a summary of the agreement for the shield machines.