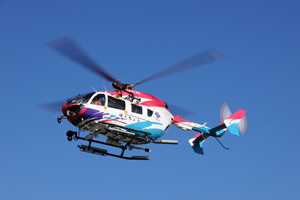 Ever since its market debut in May 1982, the BK117 has been sold to customers around the world. The 1,000th BK117 (Kawasaki BK117C-2) was delivered to the Shimane Prefectural Government to be deployed by the Shimane Air Rescue Team as a fire fighting and disaster relief helicopter. The new helicopter marked the 158th C-2 model to be delivered by Kawasaki.

Developed and manufactured jointly by Kawasaki and Eurocopter Deutschland, the BK117 is a best-selling helicopter that is deployed around the world. It has earned high marks for its roomy cabin space, compact body and excellent mobility, as well as the large clamshell doors at the rear that facilitate the loading and unloading of materials and equipment. The BK117 covers a broad spectrum of applications, including broadcasting, transporting cargo and passengers, fire fighting and disaster relief operations, police work and emergency medical services.