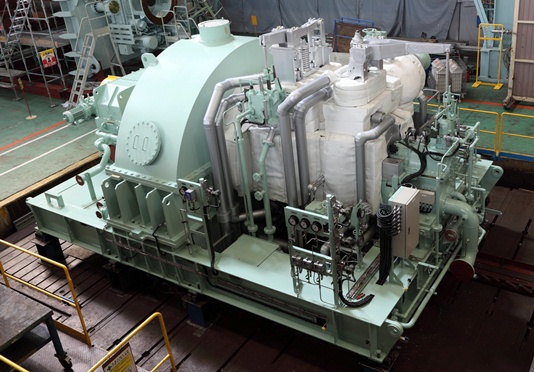 The latest shipment comprises one of the two steam turbine generators ordered from Nippon Steel Engineering Co., Ltd. These generators are designed to be installed in a coke dry quenching (CDQ*1). CDQ quenches red-hot coke that has been dried by distillation in a coke oven*2 with inert gas and recovers sensible heat*3 using a boiler to produce steam for power generation.

Dragon Steel, a key subsidiary of China Steel Corporation (Taiwan's largest steel maker), produces coke for use in its steel manufacturing process. The company currently has two blast furnaces, and it is installing a new CDQ and Kawasaki's steam turbine generators with an eye to saving energy and cutting CO2 emissions.

Since the launch of its first industrial steam turbine in 1956, Kawasaki has supplied approximately 350 steam turbine units worldwide, including 14 CDQ steam turbines. The latest order is a testament to this extensive track record, in addition to the superior performance and lifecycle cost of Kawasaki steam turbines, that has made Kawasaki a trusted name across the globe.

Kawasaki continues to expand the sales of its highly efficient power generation systems, boasting a smaller environmental footprint than ever, as it moves forward to bring its energy and environmental business to new heights.

About the CDR steam turbine generator

*1 Dry coke quenching:
CDQ quenches red-hot coke that has been dried by distillation in a coke oven with inert gases circulating in a quenching chamber. The CDQ quenching process occurs in a completely air-tight environment. The thermal energy, which would otherwise dissipate into the ambient environment as vapor with conventional wet quenching methods, can be recovered by the CDQ and used to generate electric power.

*2 Dry distillation of coal:
A process in which coal is heated at high temperatures to be decomposed into coke and volatile gases.

*3 Sensible heat:
Thermal energy transferred to or from a substance, resulting in a change of temperature but no change in the substance’s physical state.