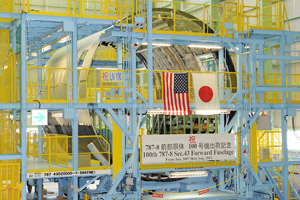 Tokyo, August 28, 2012—Kawasaki Heavy Industries, Ltd. announced today that it has delivered the 100th forward fuselage of the 787 Dreamliner base model (787-8) to Boeing.

The 787 Dreamliner is already the world’s best-selling airplane, with more than 800 orders from over 50 airlines and leasing companies around the world. Seventeen airplanes have been delivered so far since the first 787-8 airplane was delivered to ANA in 2011.

Kawasaki has joined in the development and series production of the 787 Dreamliner since May 2005, and has manufactured the forward fuselage, fixed trailing edge, and main landing gear. Of particular note is the forward fuselage, which employs the world’s first composite one-piece barrel structure as a commercial airplane.

In 2010, Kawasaki received the Supplier of the Year Award, which Boeing awards to companies that have made an outstanding contribution in various areas.

Kawasaki will contribute to Boeing's 787 program by continuously providing high-quality products, while actively promoting business operations as we expand our commercial airplane business.