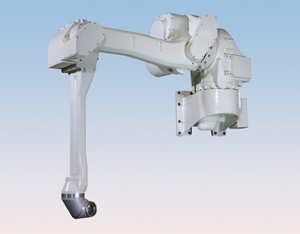 The KJ-series builds on the superior performance of the existing KF-series and KG-series to deliver further enhancements. The new series is compatible with a broad range of painting applications spanning from automobile body and parts to the general industries.

While the existing painting robots employ a six-axis arm specially developed for each of the three installation methods (floor/wall/shelf-mounted), the KJ-series employs a common platform type arm that can be used with all installation methods by changing the base section. In addition to the KJ264 with a six-axis arm, the lineup includes the seven-axis type KJ314 with an additional axis built into the base section, enabling broader application.

The KJ-series features a lighter and slimmer arm than existing models and integrates cables inside the structure, enabling high-density robot layout. This design feature enables reducing the dimension and strength of the painting booth, which translates into major savings in production facility and maintenance costs.

- To respond to the diversification of robot layout, the six-axis KJ264 will be offered in three types with varying base sections designed for shelf/wall/floor mounting. This allows greater freedom in designing the painting booth.

- The seven-axis KJ314, which is a six-axis shelf-mounted robot with an additional rotating axis, will be added to the lineup. Increasing the number of axes ensures a wider operating range and makes it easier for the robot to avoid interference, enabling the reduction of painting booth size.

- By changing the material of the robot structure, the weight of the robot body has been reduced to approximately 33% of that of existing models. The lighter weight will allow for easier installation and a reduction in painting booth strength, enabling savings in the initial cost for booths.

- The entire length of the arm has been designed to be considerably slimmer than existing models, enabling the interior painting of automobiles despite its size.

- The KJ-series employs a hollow structure in the rotating axis of the base section. Paint tubes and power supply cables, etc. can be passed through inside the rotating axis, avoiding interference with the robot and enabling high-density robot layout.