Tokyo, May 17, 2012—Kawasaki Heavy Industries, Ltd. announced today that it has developed an exhaust gas recirculation (EGR) system to be used with marine diesel engines. With this latest achievement, Kawasaki has managed to reduce nitrogen oxide (NOx) emissions from marine diesel engines to below the International Maritime Organization (IMO) Tier III regulations, either with the EGR system alone or with the EGR system and water-emulsion fuel* combined.

The breakthrough technology marks the first in Japan to reduce NOx emissions from marine diesel engines to below Tier III regulations with a combination of the EGR system and water-emulsion fuel.

The EGR system curbs the production of NOx by redirecting some of the exhaust gas back to the engine, and lowering the combustion temperature inside the cylinder. Compared to other NOx reduction technologies, this system uses smaller auxiliary devices and enables the use of bunker heavy fuel oil.

In addition to these common features, Kawasaki's EGR system comes equipped with a proprietary scrubber unit that washes pollutants from exhaust gas returned to the engine, thereby ensuring safety of the scavenging system. Moreover, Kawasaki's unique selection of an exhaust gas and scavenging system for EGR and a turbocharger makes it possible to reduce NOx with only a minimal impact on fuel oil consumption.

Kawasaki has also confirmed that fuel oil consumption is improved by combining water-emulsion fuel with the EGR system, compared to when the EGR system is used alone.

With the latest success in reducing NOx emissions, Kawasaki is now moving ahead with development efforts to optimize system performance. Kawasaki is also designing an EGR system package that offers diesel main engines fitted with the main EGR system components for on-board installation. Product launch is expected in 2015.

Kawasaki will continue to develop new technologies that will help conserve and improve the global environment.

*Water emulsion fuel is a type of fuel containing fine water particles. The water particles dispersed throughout the fuel capture ambient heat when they evaporate. This reduces the combustion temperature inside the cylinder, thereby decreasing the production of NOx. 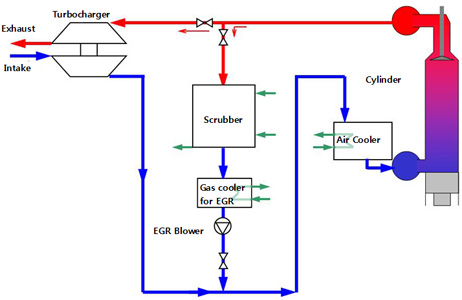