Kawasaki to Participate in a Joint Venture Project for Building Drill Ships etc. in Brazil 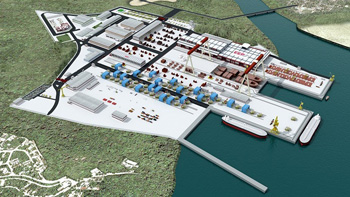 Tokyo, May 5, 2012—Kawasaki Heavy Industries, Ltd. (KHI) announced today that it has decided to participate in a joint venture project for building drill ships etc. in Brazil, and executed a shareholders agreement on May 4, 2012 (local time).

KHI will invest in Estaleiro Enseada do Paraguaçu S.A. (EEP), located in Bahia State, Brazil, as a 30% shareholder and transfer its technology to EEP. EEP is a joint venture company founded by Brazilian first class general contractors, Odebrecht, OAS and UTC (Brazilian Partners) for construction and integration of offshore units, such as platforms, support vessels and drilling units, to which KHI will transfer its technology for the construction of the shipyard and drill ships.

In Brazil, a considerable amount of offshore oil reserves were found in the ultra-deep layer, leading to a spike in demand for various ships, including drill ships & FPSO for the drilling and production. EEP is quite active in the marketing in this sector, obtaining a letter of intent from Sete Brazil (Investment company of Brazil in Oil & Gas industry) for the construction of 6 drill ships to be chartered by Petrobras, a state-owned oil company in Brazil.

EEP will be the third overseas shipyard for KHI following NACKS and DACOS. KHI will be actively involved in the construction of various ships at EEP, with an eye to assisting in the growth of the company and increasing its profitability.

Outline of the Joint Venture Company