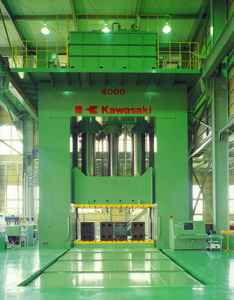 Tokyo, April 25, 2012—Kawasaki Hydromechanics Corporation (KHM), a Kawasaki group company, announced today that it has received an order for a large composite molding system with a 35,000-kN hydraulic press from NCC, Nagoya University's National Composite Center. The order, worth approximately 900 million yen, is scheduled to be delivered in March 2013.

Founded this year on April 1, NCC is a collaborative effort between industry, academia and the Japanese government to study and develop molding techniques for carbon-fiber-reinforced plastic (CFRP). The introduction of the large composite molding system will enable NCC to test and evaluate CFRP molding techniques on full-scale components—which until now could only be done overseas. Manufacturing technology established by NCC can be fed directly into the production lines.

CFRP, weighing only a quarter the weight of steel but 10 times as strong, makes a perfect material for reducing weight without compromising strength, and it has found such applications as aircraft materials. Recent years have seen a surge of R&D efforts with an aim of creating lighter and more fuel-efficient automobiles. To that end, molding technology enabling low-cost mass production is much awaited.

The molding system ordered for NCC will be tailored for the development of a mass-production system. With a maximum output of 35,000 kN to enable molding large components up to 3 m x 2 m in dimension, the system consists of various cutting-edge components including a large hydraulic molding press, LFT-D unit, IR heater, RTM injector, temperature regulators and vacuum suction device.

This molding system will reduce production cost as well as tact time through thermoplastic CFRP molding enabled by the LFT-D unit. By combining an IR heater and a RTM injector, it will enable testing and selecting a CFRP molding technique most suitable for the shape, strength and cost of a particular component, thereby contributing to the construction of an optimal mass-production system.

KHM has manufactured more than 2,000 hydraulic presses to date, of which molding machines for large resin, etc. boast a share of over 80% in Japan. KHM's CFRP molding machines support the R&D efforts of materials manufacturers as well as the University of Tokyo's sustainable hyper-composite research project.

Kawasaki and KHM will continue to develop and propose CFRP molding systems for both thermoplastic and thermosetting applications. 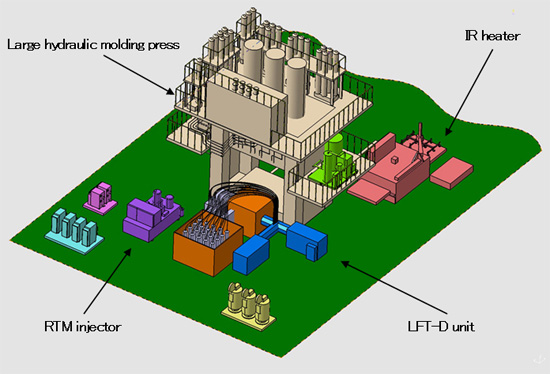