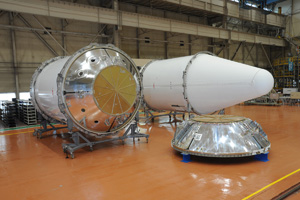 Tokyo, April 2, 2012—Kawasaki Heavy Industries, Ltd. announced today that it has shipped a payload fairing (PLF*1) for the H-IIA Launch Vehicle No. 21 to the Tanegashima Space Center. After design and parts manufacturing at Kawasaki's Gifu Works, the PLF was finally assembled and shipped from the Harima Works. The PLF will be delivered to Mitsubishi Heavy Industries, Ltd. and then be incorporated into the H-IIA Launch Vehicle No. 21 in preparation for the upcoming launch scheduled for May 2012.

Measuring 16 m in length and 4.1 m in diameter, the dual-type 4/4D PLF is capable of carrying two satellites at the same time. In the upcoming launch, it will carry the Global Change Observation Mission 1st - Water (SHIZUKU)*2 of the Japan Aerospace Exploration Agency (JAXA) and the Korea Multi-purpose Satellite-3 (KOMPSAT-3)*3 of the Korea Aerospace Research Institute (KARI).

The PLFs for the H-IIA launch vehicle are designed to meet a broad range of payload specifications such as the launch of large satellites as well as the simultaneous launch of two satellites. Kawasaki is playing a vital role in today’s satellite launch industry via the development and production of cutting-edge PLFs.

Overview of PLF for H-IIA Launch Vehicle No. 21

*2. SHIZUKU (GCOM-W1) will be launched as part of a project to observe the long-term changes in the global environment from outer space. It will be used to observe precipitation, water vapor, sea surface wind speed and sea surface temperature.

*3. KOMPSAT-3, a successor to KOMPSAT-1 and -2, features an optical instrument with enhanced resolution capability. Following the sun-synchronous orbit, it will perform various environmental observations and provide high-resolution image data needed for geographical analysis.