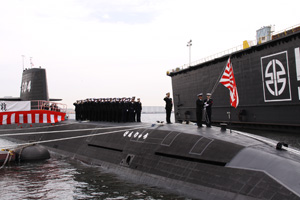 Tokyo, March 16, 2012—Kawasaki Heavy Industries, Ltd. today held a ceremony marking the delivery of the submarine Kenryu to the Japan Ministry of Defense (MOD) at its Kobe Shipyard’s Nishihama Quay at 11:30 AM. The ceremony was attended by a delegation of top MOD officials.

The submarine is the fourth Soryu class submarine built by Kawasaki, and the 25th built at this shipyard after World War II.