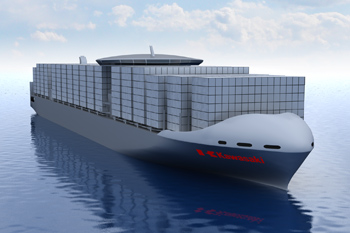 The new LNG container ship is equipped with a fuel tank large enough for the ship to cross the Pacific both ways, let alone navigate the North American and European Emission Control Areas (ECAs). The ship features a dual-fuel propulsion system, which enables heavy fuel oil to be used as backup fuel.

- The ship is powered by an electronically controlled, dual-fuel, low-speed diesel engine which, coupled with a fully optimized hull form, reduces environmental impact with its excellent combustion efficiency.

The International Maritime Organization (IMO) has been gradually stepping up control of NOx and SOx emissions, and it has already decided to put a limit on CO2 emissions as well. Compared with container ships that run on heavy fuel oil, LNG-fueled container ships reduce CO2 emission by approximately 30%. Further, to meet the new IMO SOx and NOx (Tier III) regulations slated to take effect in 2015 and 2016, respectively, these ships are designed to reduce emissions of NOx by as much as 80% and SOx by nearly 100%.

As a pioneer in the field of LNG-fueled ships and a major contributor to the industry in Norway, DNV represents the leading-edge of European technology in this field. Kawasaki has earned an AiP for both the overall system of the ship and the LNG fuel tank from DNV. Kawasaki will continue to perform a comprehensive safety evaluation in cooperation with DNV.

With a wealth of know-how acquired over the years through its experience with LNG Carriers, Kawasaki plans to make new inroads into the field of LNG bunkering vessels in an effort to create new values. Building on the latest development efforts, Kawasaki will continue to add to its offerings of eco-friendly ships. 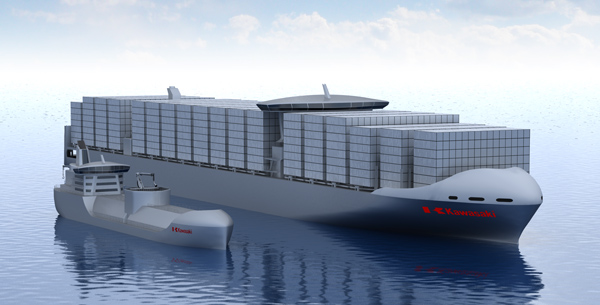