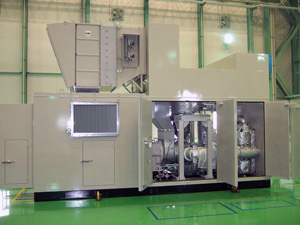 Tokyo, December 21, 2011 ― Kawasaki Heavy Industries, Ltd. announced today that it has developed the world's first gas turbine generator which uses ventilation air methane (VAM)*1 as fuel in the treatment of dilute methane emitted from coal mines. Kawasaki aims to offer the generator as a solution to help curb the massive amounts of low concentration methane emissions from coal mines all over the world.

Coal seams contain methane generated in the geological process of coal formation, and this methane is released during coal mining. Released methane is extracted as coal mine methane (CMM)*2, and CMM with over 30% methane content is used for power generation and other purposes. However, CMM with methane content of 1 to 30% and VAM, which has a methane content of less than 1%, currently have no application and are thus vented to the atmosphere.

Methane, listed as a greenhouse gas in the Kyoto Protocol, is about 21 times more effective in trapping heat than carbon dioxide. Therefore, allowing VAM, which accounts for 60 to 80% of methane emitted in the mining process, to be released to the atmosphere is not just a waste of energy. It contributes to global warming.

The VAM-fueled gas turbine generator developed by Kawasaki burns a lean mixture of air and methane comprised of VAM and a small amount of dilute CMM in a catalytic combustor to generate electricity. Exhaust heat from the generator is used in oxidizing VAM with an oxidizer to further reduce greenhouse gas emissions.

Both the generator and oxidizer employ catalytic combustion for a more environmentally-friendly operation. This combustion method can burn low concentration methane, which is not possible by conventional methods, while its low combustion temperature eliminates acid rain-causing NOx emissions.

After testing for reliability and durability, Kawasaki will market the new generator mainly to coal mines in China and Australia as well as landfills in the U.S. with high emissions of low concentration methane.