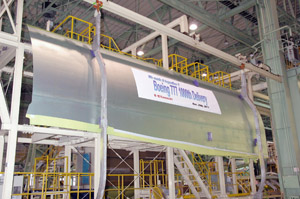 The Boeing 777, which went into service in 1995, is now operated by 64 airlines around the globe. Since 1991, Kawasaki has been developing and building the forward and center fuselage panels, center wing substructures, cargo doors and pressure bulkhead for both passenger and freighter 777 models. The 1,000th panel that Kawasaki delivered is a component of the forward fuselage for the 777-300ER and the following components are scheduled to be delivered.

Kawasaki will keep its contribution to the Boeing programs with supplying its high quality products and positively driving its activities for the development of its commercial aircraft business.