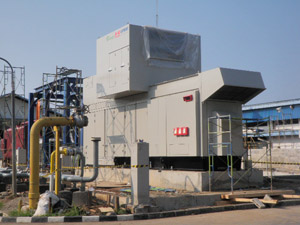 The gas turbine system has been installed by PT.Euroasiatic as part of the cogeneration system at a plant belonging to P.T.Sumi Rubber Indonesia, the local subsidiary of leading tire-maker Sumitomo Rubber Industries, Ltd. The cogeneration system consists of a natural gas-burning GPB80, which is gas turbine power generation system powered by the Kawasaki-developed M7A-03 Kawasaki Gas Turbine, and a waste heat recovery boiler which captures exhaust gas as steam from the power generator. All power and steam generated by the system is supplied to production facilities within the plant, helping to deliver a more stable supply of power.

Under the project, the GPB80 was manufactured and supplied by Kawasaki, sale of the GPB80 was handled by Kawasaki Gas Turbines Asia, and peripheral equipment for the boiler as well as local installation and operational testing was undertaken by Euroasiatic. The power generation system came on line July 2011.

Beginning with delivery of its 3000-kW class gas turbine in 1994, Kawasaki has delivered a total of 21 Kawasaki Gas Turbines to Indonesia, with the current order marking the 2nd GPB80-series gas turbine power generation system to be delivered.

This order is further testament not only to the superior environmental performance and lifecycle cost of Kawasaki's gas turbine cogeneration systems, but also to the company's high level of technological expertise, the leading world-class power efficiency of its systems, and a proven track-record of successful deliveries in Indonesia, Malaysia, and other parts of South and Southeast Asia.

Because the supply of power in Indonesia tends to be unstable, the use of power generation systems using natural gas is on the rise in urban and industrial areas, where natural gas pipelines are growing. Demand for gas turbines can be expected to rise in the future.

Via Kawasaki Gas Turbines Asia and Euroasiatic, Kawasaki will further strengthen the market for gas turbine generation systems in Indonesia and also throughout South and Southeast Asia. Moreover, Kawasaki will utilize local sales offices in the Americas, Europe, the Middle East, and the Far East as well and continue to expand its business through its five-region approach to global operations.