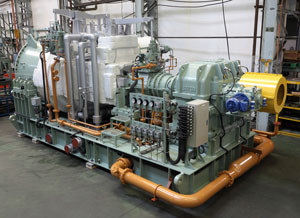 Tokyo, August 3, 2011 — Kawasaki Heavy Industries, Ltd. announced today that it has shipped a steam turbine generator with a rated output of 29.7 MW from its Kobe Works to the POSCO*1 Gwangyang Steel Works in Korea.

Designed to reuse energy, the steam turbine generator will be installed in a coke dry quencher (CDQ*2) at POSCO’s Gwangyang Steel Works. The CDQ will quench red-hot coke that has been dried by distillation in a coke oven*2 with inert gas and then recover sensible heat*3 using a boiler to produce steam for power generation. The Gwangyang Steel Works, which currently has five CDQs, decided to install an additional CDQ as part of its plan to expand its coke oven facility.

Kawasaki released its first industrial steam turbine in 1956. Since then it has accrued a long list of achievements encompassing the delivery of about 340 steam turbine units, including the sale of 10 steam turbines to POSCO. This latest shipment to POSCO is a testament to the superior performance and lifecycle cost of Kawasaki steam turbines as well as its outstanding reliability and proven track record.

Kawasaki continues to leverage its rich experience in the area of power generating steam turbines with the goal of expanding sales and meeting today’s growing need for greater energy efficiency.

*1 A CDQ quenches red-hot coke (dried by distillation in a coke oven) with inert gases circulating in a quenching chamber. The CDQ quenching process occurs in a completely air-tight environment. The thermal energy, which would otherwise dissipate into the ambient environment as vapor under conventional wet quenching methods, can be recovered by the CDQ and used to generate electric power.

*3 Sensible heat is the thermal energy transferred to or from a substance, resulting in a change in temperature without a change in the substance’s physical state.