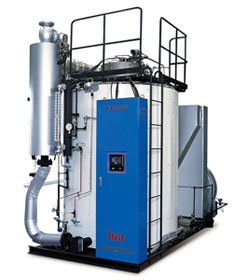 (2) the outstanding efficiency and compact footprint of a small once-through boiler.

Since the launch of the Ifrit series of boilers in 2000, their unrivaled steam pressure stability, high efficiency and quick start-up capability have made them the perfect solution for industrial heating systems and more.

This new system with improved combustion airflow delivers better flame holding capability during low-load operation and controls the burner output to a fifth of the maximum firing rate. The result is higher energy efficiency and a smaller environmental footprint. Since the system can keep firing without turning off, it minimizes fluctuations in boiler steam pressure during low-load operation (at 20% - 33% load) as well as heat loss during purge cycles.*2 Thanks to these remarkable features, the system can reduce fuel consumption and CO2 emissions up to 22%*3 more than any conventional boiler (achieving only a 3:1 turndown) can do on its own.

The system is the ideal solution for batch operation and steam absorption chilling processes where a burner must be operated on a constant on and off cycle due to fluctuations in steam load.

Kawasaki is responding to market needs with an eye to protecting the environment via the development and delivery of systems and equipment providing superior energy efficiency and environmental performance.

*2. A burner goes through a purge cycle before and after each ignition sequence. Heat is removed from the boiler as the burner is purged with fresh cold air during the purge cycle.