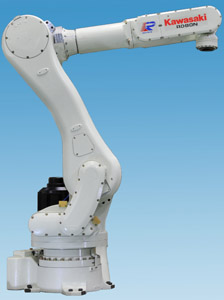 The RD80N is designed for loading cardboard boxes and bags onto palettes for logistics work. The RD80N is a vertical articulated robot developed by improving upon the excellent performance of the conventional FD50N. For this vertical articulated robot, the performance in speed, repeatability, etc. has been significantly improved with a maximum payload capacity of 80 kg.

The RD80N’s lightweight arm and small high power/high speed motor give it higher speed and acceleration than conventional models, allowing the payload capacity to be increased by 30kg. This increases throughput by about 25% and it demonstrates throughput of 900 cycles* per hour, making it the best in its class. With improved design flexibility of the hand, it is now possible to load multiple heavier works at a time.

For various applications from high-speed packing of food products on conveyor belts and packing into cardboard boxes to palletizing, we provide compact, high-productivity automated systems based on our RD80N combined with the YF03N high-speed picking robot and small to medium size R-series general-purpose robots.

We are actively developing and supplying Kawasaki robots to meet a wide-range of future user requirements.

The lightweight arm and small high power/high speed motor provide improved speed and acceleration. In addition, acceleration is automatically adjusted to match the load and pose, allowing optimum performance to always be achieved resulting in a significant reduction in cycle time.

Based on improved speed and acceleration a throughput of 900 cycles per hour has been achieved. This is about 25% faster than conventional models and contributes to increased productivity.

3) Compact Body with a Wide Range of Movement

By extending the operating stroke of each axis, the range has been extended by about 50 mm for vertical operations as compared to conventional models. This results in increased freedom of layout and allows optimum coverage of 1,100 mm x 1,100 mm palettes. Also, increasing the load capacity while achieving a compact body results in improved work accessibility and closer spacing between robots, allowing high-density arrangement robot systems to be constructed.

The Simple Palletizing Software, K-SPARC, (to be released in August 2011) will allow layout planning and operations to be simulated on a PC. Compared to conventional palletizing software, K-SPARC has an increased number of stacking patterns with improved usability and allows for easier teaching.