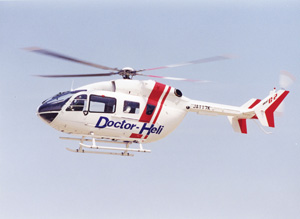 Tokyo, July 6, 2011 — Kawasaki Heavy Industries, Ltd. announced today that it has received an order for two BK117C-2 helicopters from Nishi Nippon Airlines Co., Ltd. The helicopters, to be used as medevacs in Kumamoto and Miyazaki prefectures, are slated for delivery starting in December 2011.

The Kawasaki BK117 helicopter was developed jointly by Kawasaki and European helicopter manufacturer, Eurocopter Deutschland (ECD), formerly Messerschmitt-Bolkow-Blohm (MBB). The BK117 is a medium-sized twin-engine multi-purpose helicopter that’s used for everything from broadcasting to transporting cargo and passengers, fighting fires, police work, emergency medical services and more. When employed as a medevac, the large clamshell doors at the rear of the BK117 facilitate the quick transfer of patients in and out of the helicopter. Its roomy cabin also enables the onboard medical team to easily move around inside the helicopter as they provide care for the patient. These outstanding features as well as its compact body and superior mobility have earned the BK117 high marks around the world for emergency medical services.

The BK117 has been continually upgraded since its market debut in 1983. Cutting-edge technology and outstanding reliability have proven to be a winning combination for Kawasaki’s BK117 which has earned the distinction of being the bestselling model in the world today. Kawasaki has delivered 153 BK117s, and together with those delivered by ECD there are over 850 in use around the globe.

Kawasaki continues to outpace the competition with its proven superior technological capabilities and outstanding customer services as it actively markets its BK117C-2 helicopter.