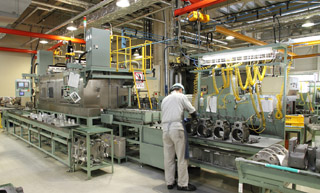 The new production facility was built to meet the increasing worldwide demand for hydraulic construction machinery equipment. Completed in December 2008, full operation of the facility had been temporarily halted in the wake of the global financial crisis. As demand in the Chinese market continued to surge over the last year, Kawasaki gradually outfitted the facility with new processing, assembly and other production equipment needed to boost hydraulic pump production capacity.

The construction machinery market is expanding across the globe. China, which is aggressively investing in infrastructure, urban and natural resources development, is hardly the only place where demand is on the rise. Soaring prices for natural resources continues to fuel demand in resource-rich nations throughout South America and elsewhere as well.

Kawasaki will leverage its enhanced production capacity to meet this increasing demand with a keen focus on providing highly reliable, high-performance products to the ever-expanding global hydraulic equipment market. Driven by a deep commitment to improve after-sales and service capabilities, Kawasaki is bringing customer satisfaction to new heights.

About the New Facility