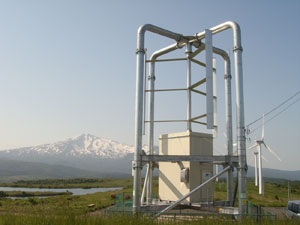 Tokyo, May 17, 2011 — Nippi Corporation, a wholly-owned subsidiary of Kawasaki Heavy Industries, announced today that it has received an order for a 20 kW wind power generation system. The system will be installed in Antarctica by the National Institute of Polar Research (NIPR).

Following its scheduled delivery to NIPR in late September, the wind power generation system will be transported aboard the Antarctic exploration ship Shirase to the Showa Station in Antarctica in November. Upon arrival in Antarctica, the system will be installed and used during the 53rd Japanese Antarctic Research Expedition.

Once installed at the Showa Station, the wind power generation system will be operated in conjunction with the main diesel generator as part of NIPR’s environmental initiatives aimed at shifting toward greater use of renewable energy sources.

Prior to installation at the Showa Station, NIPR conducted a series of tests using the same kind of Nippi wind power generation system at Nikaho Highland in the City of Nikaho, Akita Prefecture where wind conditions are similar to those at the Showa Station. After operating for over 10,000 hours during a two-year test run that started in April 2009, the system is still in operation at Nikaho Highland. This latest order for a wind power generation system is the second Nippi has received since delivering that first system in March 2009.

Nippi has leveraged its wealth of technological expertise in aircraft design and manufacturing to develop this vertical axis wind power generation system. Its compact design and superior features make it perfect for installation on building rooftops, factory sites, and more. The system is available in 5-kW, 10-kW and 20-kW models. The wind power generation system most recently ordered by NIPR is a 20-kW model incorporating special design modifications tailor-made for Antarctica’s extremely cold climate conditions.

Kawasaki is working to power the future with sustainable energy technologies and products that tap renewable energy sources as it moves forward to reduce greenhouse gas emissions and make more efficient use of the Earth's resources.

* This column lists the specs for the most recently ordered model.