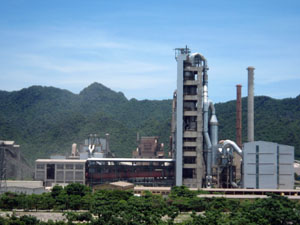 Tokyo, February 8, 2011 – Kawasaki Heavy Industries, Ltd. announced today that it has completed and delivered a cement plant to But Son Cement Joint Stock Company, a subsidiary of Hanoi-based Vietnam Cement Industry Corporation, controlled by the Vietnam Ministry of Construction.

The newly delivered plant was ordered in July 2006 as a new addition to the existing cement plant in the Kim Bang district of Ha Nam. The plant is one of Vietnam’s large-scale cement plants with a production capacity of 4000 tons/day, and provides integrated production, from raw material receiving to grinding, burning, and cement shipping. Kawasaki is responsible for the design and delivery of a full set of process equipment/machines used in the line, from raw material receiving to cement shipping, and will also supervise their construction, erection, and commissioning. With completion of this expansion project, But Son Cement Joint Stock Company will have a doubled production capacity to meet the growing demand for cement in Vietnam. In addition, with a high-performance dust collecting facility and low-noise and low-vibration systems equipped and used, the plant will contribute significantly to preserving the natural environment.

Kawasaki has already delivered roughly 90 cement plants worldwide. In Vietnam, where demand for cement has been growing rapidly, Kawasaki had previously delivered the Cam Pha Cement Plant, the nation’s largest with a production capacity of 6000 tons/day, to VINACONEX corporation in 2008. The current delivery thus marks Kawasaki’s second such plant. With this record of proven deliveries, Kawasaki will have positioned itself at the fore not only in Vietnam but in new large-scale cement plant project talks anticipated elsewhere in the world.

Leveraging its superior technological expertise and reliability, Kawasaki will continue to actively develop its cement plant business throughout the world.