Mega Class Urea Plant Up and Running in Pakistan 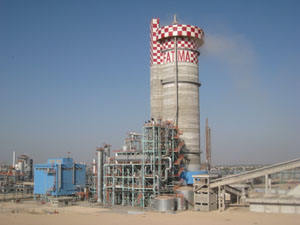 Tokyo, January 20, 2011 — Sojitz Corporation and Kawasaki Heavy Industries, Ltd. announced that they have successfully completed commissioning and performance tests for a new urea plant in Pakistan. This new plant is the core facility of a fertilizer complex operated by Fatima Fertilizer Company Ltd., a Lahore-based company operating under the umbrella of the Fatima Group, one of Pakistan’s largest industrial conglomerates.

The fertilizer complex, constructed by Fatima Fertilizer near Sadiqabad, a city located in central Pakistan, will produce urea as well as various other synthetic fertilizers from ammonia using natural gas produced in the nearby Mari Gas Field. The facility, with a daily urea production capacity of 1,500 tons, is one of the largest in the country.

Sojitz and Kawasaki were awarded a contract for this project, valued at approximately 13 billion yen, in June 2006. Sojitz was responsible for coordinating the overall contract administration process while Kawasaki performed engineering, procurement and technical services for the urea plant in addition to project management services.

There is currently a growing demand in Pakistan for fertilizer, a vital material needed to maintain and fuel further development of agriculture, the country’s main industry. The devastating floods that occurred last July delivered a severe blow to Pakistan’s fertile farmlands. It’s against this backdrop that the new fertilizer complex has fallen under the national spotlight as it brings new hope for the recovery of Pakistan’s troubled agricultural sector.

Sojitz and Kawasaki were also awarded a bid to build Turkmenistan’s largest fertilizer production facility in December 2009. The project is currently underway with funding from the Japan Bank for International Cooperation (JBIC) and full support from Nippon Export and Investment Insurance (NEXI). The project is expected to rapidly boost agricultural development as well as employment in Turkmenistan.

Sojitz and Kawasaki will continue to leverage the know-how and expertise they have gained via their overseas operations as they move forward to implement projects that are helping to build a brighter future for the people of Pakistan as well as the rest of Asia and the Middle East.