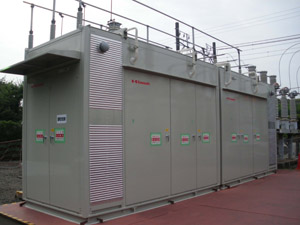 Tokyo, January 18, 2011 – Kawasaki Heavy Industries, Ltd. announced today that it has successfully completed a verification test of the railway wayside energy storage system it developed, called the Battery Power System (BPS), on the Den-en-toshi Line operated by Tokyu Corporation. The test, conducted in cooperation with Tokyu Corporation, Tokyu Techno Systems Co., Ltd., and Fuji Electric Systems Co., Ltd., was designed to see how effectively the BPS can reduce the need for regenerative braking cancellation, save energy, reduce CO2 emissions, and stabilize traction power line voltage. This is the first time ever that a railway wayside energy storage device connected directly to a standard 1500 VDC traction power line has demonstrated the ability to reap these benefits.

The BPS uses Kawasaki’s proprietary large-scale nickel-metal hydride GIGACELL※1 battery. The major feature of the BPS is that it does not need any kind of control device, such as a chopper, because it is connected directly to the traction power line. The absence of the controller means no controller-related losses and delays, nor any electromagnetic interference (EMI) that can interfere with railway signal and communication systems, in addition to making for a more compact system. The BPS has been in operation at the Tokyu Den-en-toshi Line’s Tsukimino substation since August 2010 where it has been effectively eliminating regenerative braking cancellation, saving energy, reducing CO2 emissions, providing voltage stabilization and more.

According to estimates based on the test data, the system will save roughly 1,600 MWh of electricity and cut CO2 emissions by approximately 669 tons※2 annually. The BPS reduced the maximum voltage by 62 volts while increasing the minimum voltage by 23 volts at the Tokyu Den-en-toshi Line’s Chuo-rinkan Station, proving that it was able to compensate for power demand along the traction power line. Testing also demonstrated that Kawasaki’s BPS was able to not only prevent regeneration cancellation but also cut power consumption at substations, serve as an alternative power supply (enabling trains to operate even when a substation’s rectifiers are shut down), and reduce the use of the air brakes, which will reduce the need for brake maintenance dramatically.

Kawasaki will leverage these latest test results to market the BPS for use in 1500 VDC rail systems. Kawasaki is also working to bring the BPS to the smart grid, an innovative grid technology that maximizes the use of renewable energy, as well as to smart communities in an ongoing effort to find new ways to realize a low-carbon society.

※1 GIGACELL is a trademark, or registered trademark of Kawasaki Heavy Industries, Ltd. in Japan and the U.S.A.

※2 Calculated using the Tokyo Electric Power Company’s CO2 emissions coefficient (0.000418t CO2/kWh), which is based on information provided by the Japanese Ministry of the Environment (issued March 2010).