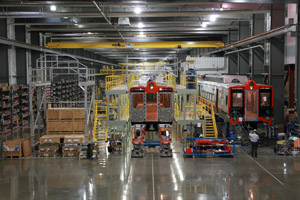 The addition will give the Lincoln plant the production capacity needed to meet a growing demand for railcars in the U.S. The larger plant is now capable of simultaneously manufacturing PA-5 subway cars for the Port Authority Trans-Hudson Corporation (PATH), a subsidiary of the Port Authority of New York and New Jersey, and M-8 commuter rail cars for the Metro-North Railroad (MNR). The newly enlarged facility will also enable Kawasaki to respond to the anticipated increase in demand that is sure to be fueled by the upcoming high speed railway project as well as other projects related to replacing aging railcar stock and enhancing transport capacity in the U.S.

Built to keep Kawasaki ahead of the pack in the rolling stock industry, the KMM Lincoln plant saw its first railcar roll off the production line in 2001. The plant is the only facility in the U.S. designed for integrated mass production of railcars, encompassing everything from subway and commuter train car body manufacturing to outfitting. The recent expansion doubles the number of production lines at the plant, giving it the capacity to work on multiple projects at the same time. Now equipped with performance test facilities, KMM can conduct performance tests on site immediately after the railcars come off the assembly line. KMM used to send railcars made at its Lincoln plant halfway across the country to Kawasaki Rail Car, Inc. (KRC) in Yonkers, N.Y. for testing. On-site testing streamlines the whole process, enabling KMM to ship directly to the customer from its Lincoln plant. KMM is now able to optimize production projects in light of customer requirements and operational load.

Based at its Hyogo Works in Kobe, Kawasaki’s railcar production operations focus on designing and developing rail vehicle systems and producing railcars for domestic and overseas markets. Kawasaki is moving right on track with railcar innovations that are bringing one of the greenest modes of transportation to new heights. Kawasaki is working closely with KRC, a company with a proven track record in the U.S. rolling stock market and the newly expanded KMM Lincoln plant to provide state-of-the-art railcars to the growing US market and world beyond.

・About the KMM Lincoln Plant