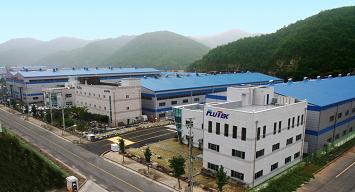 In April 2003, Kawasaki acquired a controlling interest in Flutek with an eye to boosting its hydraulic equipment business operations in Korea. Kawasaki had long provided technical assistance to Flutek as a partner and distributer of its hydraulic products. Since coming under the corporate umbrella, Flutek has served as Kawasaki’s production, sales and customer service base in Korea. The expansion of Flutek’s production plant is designed to meet the growing Korean market demand for hydraulic pumps used in construction machinery.

The new production facility has been constructed on the premises of Flutek’s Uiryeong Plant, located 60 km northeast of Changwon City. Boasting a total area of 13,200 m2 with a floor area of 7,600 m2, the facility is designed specifically for the production of construction machinery hydraulic pumps. Equipped with new manufacturing equipment as well as a hydraulic pump assembly line transferred from Flutek’s Changwon Plant, the expanded Uiryeong Plant is moving ahead with knockdown production of hydraulic pumps using core parts supplied by Kawasaki’s Nishi-Kobe Works. The addition of the new manufacturing facility has doubled the production capacity of the hydraulic pump plant.

Today construction machinery manufacturers across Korea are gearing up production of hydraulic excavators. They have set their sights on the Chinese market where rapid economic growth is fueling a need for greater infrastructure development. While demand for hydraulic construction machinery equipment is rising in Korea, the Chinese hydraulic excavator market has now become the largest in the world. Continued growth over the medium- to long-term is expected to be spurred on by ongoing infrastructure improvements to irrigation, gas, electricity and transportation networks in China's underdeveloped northeastern and inland regions.

Kawasaki is continuing to leverage the latest developments in technology with the aim of providing highly reliable, high-performance products to the ever-expanding global hydraulic equipment market. Driven by a deep commitment to improve after-sales and service capabilities, Kawasaki is bringing customer satisfaction to new heights.

About the New Production Facility