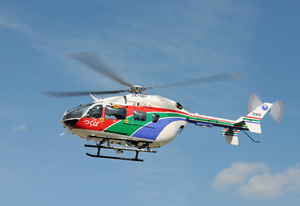 Tokyo, October 27, 2010 — Kawasaki Heavy Industries, Ltd. announced today that it has delivered its latest BK117C-2 helicopter for the Ibaraki prefectural government. The new helicopter, to be deployed by the Ibaraki Air Rescue unit, will be the sixth C-2 model to be used for firefighting and rescue operations in Japan.

The Kawasaki BK117 helicopter was developed jointly between Kawasaki and European helicopter manufacturer Eurocopter Deutschland (ECD), formerly Messerschmitt-Bolkow-Blohm (MBB). The BK117 is a medium-sized twin-engine multi-purpose helicopter that’s used for broadcasting, transporting cargo and passengers, fighting fires, as well as for police and emergency medical services. Designed for superior safety and operability, the BK117 has a compact body and large clamshell doors in its rear for transporting long objects such as stretchers. Since its market debut in 1983, the BK117 has undergone continuous improvements, making it the best selling model in the world. The cutting-edge technological features and proven track record of Kawasaki’s BK117 are a winning combination. As of October 27, 2010, orders for more than 149 helicopters built by Kawasaki together with those made by ECD add up to a total 833 BK117s delivered around the world.

The C-2 model incorporates the following major upgrades in addition to the great features of its predecessors.

Kawasaki continues to maintain its competitive edge with proven superior technological capabilities and outstanding customer services as it actively markets its BK117C-2 helicopters.