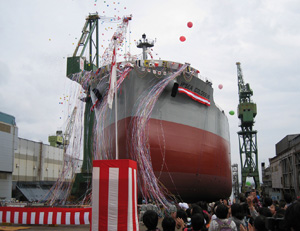 Tokyo, October 22, 2010 — Kawasaki Heavy Industries, Ltd. today launched the Ipsea Colossus bulk carrier for Singapore’s “K” Line Pte Ltd at its Kobe Works. This 197-meter-long vessel (Kawasaki hull No. 1640) is the fourth state-of-the-art bulk carrier with a capacity of 58,000 DWT to be developed by Kawasaki. After it is outfitted at the Kobe Works quay, the carrier will be delivered in January 2011.

Features of the Ipsea Colossus

1. The vessel has a flush deck with forecastle and five holds that are designed for optimum transport of grains, coals, ores and steel products. Four 30-ton deck cranes are installed along the center in between hatch covers to enable cargo loading and unloading in ports that lack cargo handling facilities.

3. The bulk carrier’s anti-corrosion coatings, complying with the new performance standards for ballast tank protective coatings (PSPC), ensure paint quality that is better than ever.

5. The Ipsea Colossus employs the latest in technology to achieve maximum fuel economy, including an energy-saving main diesel engine, highly efficient propellers, the Kawasaki rudder bulb system with fins (RBS-F), as well as a bow designed to reduce wave resistance, which all contribute to the vessel’s enhanced propulsion performance.