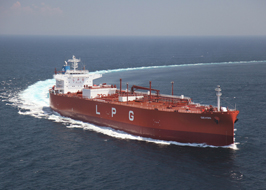 Tokyo, September 13, 2010 – Kawasaki Shipbuilding Corporation announced today that it delivered an 80,000緕･ LPG carrier, the Devon (Kawasaki hull number 1636) to Xing Long Maritime S.A. on September 10. The ship is the 46th LPG carrier built by Kawasaki, and the 7th of this particular model.

2, To load petroleum gas that has been liquefied at low temperature, the ship’s cargo hold has four separate insulated storage tanks that absorb low-temperature contraction separately from the ship.

3, The storage tanks are made of special low-temperature purpose steel and are surrounded with urethane foam insulation to permit loading of liquefied petroleum gas at temperatures as low as －46℃.