A visit to oversea subsidiaries in 2015

The environmental load of subsidiaries in Japan and overseas during fiscal 2016 accounted for 35% of the entire Group’s CO2 emissions, 38% of waste emissions, and 19% of water consumption, and management for the entire Group is thus required.
The Group has production bases in Europe, North America, South America, China, and Southeast Asia, in addition to Japan, and conducts operations according to the rules in each country and region. Even in the face of these differing situations, we set and follow up on targets for our environmental load, promote communication throughout the entire Group, and work to reduce environmental risks. 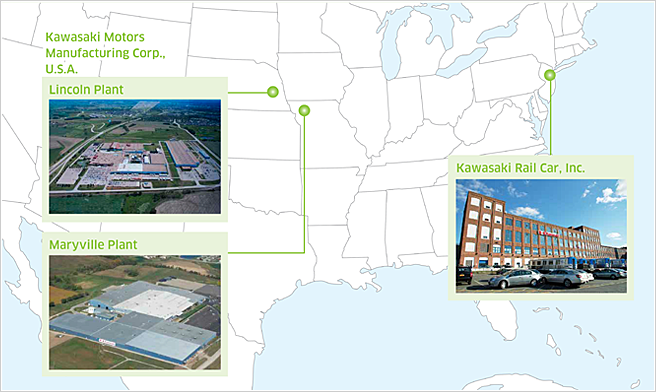 In 1985, Kawasaki established a subsidiary to locally produce commuter train cars for the Port Authority Trans-Hudson (PATH) PA-4 subway in New York. Kawasaki Rail Car (KRC) was established in 1989, under this subsidiary, to assume its parent’s operations. Located in the New York suburb of Yonkers, KRC utilizes its geographical location to provide a range of services,including final assembly, testing and after-service of rolling stock, to New York City Transit and other customers in the region.
In 2015, the company introduced an EMS based on self-declaration and assigned a manager with environmental responsibilities to oversee environmental management practices.

The Lincoln Plant of Kawasaki Motors Manufacturing, located in Lincoln, Nebraska, is a production base with a consumer products division as well as a rolling stock division. The company acquired ISO 14001 certification in 2003, and in fiscal 2016, achieved its environmental cost target—that is, expenses linked to electricity, city gas, water, wastewater and waste—of less than 0.773% of sales through monthly confirmation of progress toward this target and steps to reach the destination.
The Lincoln Plant is working on various fronts to make operations more environment-friendly, including such efforts as adjusting the placement of localized lighting, introducing sensor-equipped LED lighting, utilizing reusable containers and fixtures,switching from air driven tools to battery powered tools, and recovering drain steam.

A dedicated reusable fixture is used on the end underframe of a railway car to enable standard container storage.
As a result, the transport efficiency between Japan and the U.S. has been improved, and the reduction of wood waste has been realized.

The Maryville Plant of Kawasaki Motors Manufacturing, located in Maryville, Missouri, is a production base that focuses on general-purpose engines. The plant has obtained ISO 14001 certification and sets environment-oriented targets each fiscal year,which underpins its efforts in environmental management. In fiscal 2016, activities were directed toward boosting the recycling ratio, from the prevailing 75%, to 78%, and recycling 80% of the waste generated through new construction, and both targets were achieved. In Missouri’s “Strive for 75” initiative to recycle more than 75% of waste, the Maryville Plant achieved a recycling ratio in excess of 80% for two consecutive years and was recognized with a state environmental excellence award from the non-profit Missouri Waste Control Coalition.
The Maryville Plant undertakes various practices to enhance its environmental footprint, including routine washing and reuse of gloves, efforts to raise its exchange ratio by sorting out valuables, taking ordinary waste out of industrial waste for separate disposal, and boosting transportation efficiency and cost efficiency by utilizing waste management companies that can dispose several types of waste.